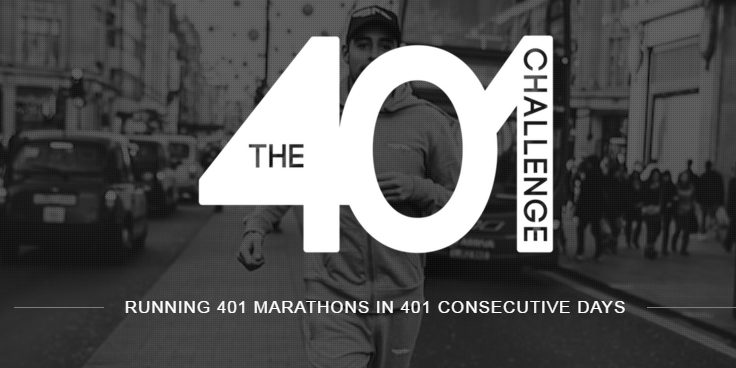 Over the last few months it has been a great privilege and pleasure to meet someone who can only be described as a truly crazy human being! The true legend that is Ben Smith. He is currently part way through running 401 marathons in 401 consecutive days – The 401 Challenge. Making Eddie Izzard look positively lazy!

We were contacted about a year ago by Ben’s mother who was organising Sports Massage for Ben after each of his marathons. Sadly, we have to say no to a lot of charity enquiries simply because we’d be working 24 hours a day if we said yes. But something about Ben’s story grabbed us.

Tear Up The Physiotherapy Text Book!

It really shouldn’t be possible. But how is one man running 401 Marathons. 401 consecutive marathons, firstly why, secondly how is he coping?!

As you can imagine one doesn’t take on such a challenge lightly. Ben talks openly about issues from what seem like a previous life or even a different person when you speak to him now.  In short he was badly bullied at school and over time the mental and physical abuse took it’s toll leading to a nervous breakdown and a suicide attempt at 18, just when his life should have been starting. Since then Ben has ‘discovered’ running. And it helped. A lot.

Ben overcame many of his problems through running and simply wants to share that inspiration and experience with as many people as possible.

How Unhinged Is This Man? 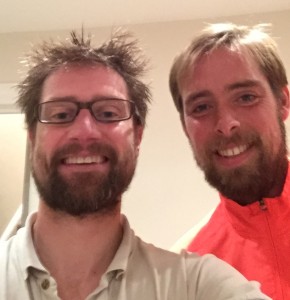 Not only can Ben run 400 more marathons than me he can also grow a better beard!

Before our first treatment back in October I really didn’t know what to expect. I’d pictured someone truly crazed and ambitious with a point to prove to the world.  What I found was quite the opposite. Ben comes across as incredibly laid back. He’s genuinely interested in everything and everyone.

Whilst obviously I was keen to understand more about the challenge he was more interested in my story and my challenges.

It must all be a front I thought! When we get down to treatment I’m sure I’ll find the body is really uptight and fraught with issues. But no. Laid back, chilled out, just happening to be having a long ‘trot’ each day for a living. Going back to the camper van and then do it all again. Eat, Run, Sleep, Repeat.

Better than a lot of us! If I was surprised how laid back Ben was I was even more surprised with how his body is coping. As you can imagine I was expecting a bit of a wreck. He came in (striding up three flights of stairs two at a time) with little to complain about other than a few tight muscles in his normal non-assuming manner and would be grateful if I could do anything to loosen them up.

The issues he was having seemed ideal for some Muscle Activation treatment. I asked if he’d had any such treatment before which he hadn’t. I explained the process and I could see that Ben was sceptical but willing to try anything that would make running marathons easier!

As we carried out the treatment Ben had quite a few painful areas. The remarkable thing was, however, that none more than any of our clients when they first come to see us. As we progressed we chatted and it was then that Ben dropped the bombshell that during the first few weeks of The Challenge his knee swelled up like a balloon. Ben’s response “Yeah, it was a bit painful.” But in true Forrest Gump fashion “I just kept on running!” A real measure of Ben’s mental strength. And an incredible example of the adaptability of the human body.

What was fantastic for me was that Ben took the time out the next day to text to say thanks for giving him his legs back. He trotted round the following days marathon cruising. Job well done. One happy Forrest Gump!

What Can We All Learn The 401 Challenge? 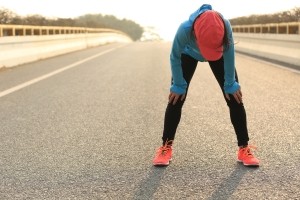 Apart from helping Ben promote his fund raising cause my motivation to write this Blog has been to pass on his message of inspiration. Surely if we can inspire people to do better things make more of their lives then the world becomes a better place. Call me a tree hugging hippy if you want!

This message of inspiration is very obvious in Ben’s response to one of many questions I asked during our sessions. “What was your slowest marathon?” (He couldn’t actually remember his fastest one!) Immediately his face lit up and he proudly announced 9 hours.  Why the pride? He completed it with a lady who had not run at all until one of Ben’s early marathons where she had joined for a few hundred metres as part of Ben’s #RunWithBen. A few months and lot of training later and she lined up with Ben at the Manchester Marathon. Hence the 9 hours. For the record she’s done another one since in less than 6. And so the inspiration spreads.

What else can we learn? As I mentioned the human body is incredible! If you give it chance it can adapt to do just about anything. We can also see in Ben that if the mind is strong the body will follow. A concept that has been around for a long time but clearly very evident in Ben. It follows the concept of central governor theory. Put simply the body will always give you more. If you’ve just finished a marathon and you can barely move and a tiger jumps out of the crowd what are you going to do? Run. Run Fast!

Finally and possibly most importantly no matter how bad we feel or how large our problems are we are able to overcome them. Does whining help? Well maybe letting some steam off is a good thing. But then we all need to do something about it. Whether it’s physical or psychological or both there are always solutions and people out there to help. Don’t allow yourself entertain the victim mentality.

Today, the 5th October, Ben is running his final marathon. A massive congratulations to Ben and the team for a truly monumental achievement. Wishing Ben all the best for his next adventure!

The awards just keep rolling in for Ben. And rightly so. I feel like a groupie watching him pick up aware after award on TV. Most notably for me on Sports Personality of The Year delivering another inspiring speech and still looking calm and collected in front of 10,000 people.

I’ve just reviews the 401 Challenge website and now is the time to start dishing out all that money raised. Ben and the team are looking to supports grass roots projects that focus on building confidence and tackling metal health issues. If you’d like more information click here: 401 Foundation.

Anterior Cruciate Ligament Rehab: How Do I Get Back To My Best?
September 25, 2016

I only needed 3 sessions to heal my shoulder but the sessions were more than just physio. Mark took a very holistic approach in healing my injury and has changed my whole perception on life, exercise and stress management. The sessions were worth every penny! I highly recommend.